A Glimpse into the 2019 Youth Assembly

A Glimpse into the 2019 Youth Assembly

Last week, I found myself in the cold, gorgeous city of New York. Coming from the San Francisco Bay Area, it took a while for me to get used to the

weather. My white sneakers became boots, my hoodie became a sweater, and my windbreaker became a trenchcoat. I was in New York to attend the Youth Assembly. I was barely able to contain my excitement when my uber driver dropped me off at the United Nations, where I would pick up my registration pass to represent the United States  as a Youth Delegate. As a first-time attendee, I was excited to learn about the Sustainable Development Goals, meet other delegates from around the world, hear from prominent individuals, and of course, understand the powers of youth advocacy and involvement in addressing global issues. 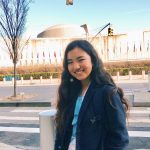 This year’s theme was “Empowering Youth for Global Development.” I would join over 900 young people from over 95 countries in this three-day assembly. This conference would allow for the opportunity for exceptional youth to interact with UN officials and influential professionals. As youth are 100% of the future, it is important for youth to learn from and discuss with global leaders, and the Youth Assembly provides us with this chance.

Our first visit was to the United Kingdom’s Mission to the UN. There, we got to speak to a representative from the UK. He talked to us about his career in International Affairs as well as the UK’s role in diplomacy. We were also able to ask him questions about specific issues, which included inquiries about world parliament, aid to developing countries, and the threat of Climate Change.

Our next stop was at the Opportunities Fair, where organizations such as HeforShe, UNICEF, Zero Hour, United Planet, Idealist, the UNDP, and 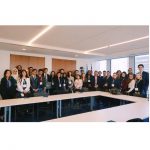 many more would speak to us about their organization and the opportunities they provided, such as volunteering, interning, or working with them.

Our final stop of the first day would officially start the Youth Assembly. The Opening Ceremony at Hunter College included remarks from several UN Officials such as Satya S. Tripathi, the Assistant Secretary General of the United Nations and H.E. Ms. Simona-Mirela Miculescu, the head of the UN office in Belgrade. I especially enjoyed Dr. Djibril Diallo’s, the Coordinator of the UN Senior Africans Group, remarks. He gave a passionate talk about gender equality and youth activism, which helped energize us after a long day of walking and speaking with individuals.

For all of Saturday and most of Sunday, youth delegates attended various workshops to not only learn about issues such as gender inequality and poverty but also learn about ways we can turn our ideas into action and initiative through lectures about fundraising and grants and speaking with alumni.

These breakout sessions exemplified the role of youth in taking action to help propel the 2030 SDGs of the United Nations. For example, the 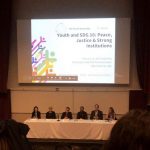 “Empowering Youth to Tackle Gender Inequality” seminar identified ways and encourage delegates to take action in our own communities to tackle the issue of gender inequality. Whether it was starting a campus chapter to build awareness or writing letters to legislators, we could make an impact on mitigating gender inequality on our local, national, and global communities.

The Youth Assembly truly allowed me and many other youth delegates understand the various perspectives and broad impact of global issues. Breakout sessions such as “Asia and the Pacific: Contemporary Challenges & Opportunities” helped bring a new perspective on many different issues such as climate change, fertility rates, disability rights, and more. Haoliang Xu, assistant secretary general of the UN; Eugenia McGill, senior lecturer at Columbia University; and Dr. Malvika Iyer, a bomb blast survivor, all helped to bring a new perspective in modern issues and the Sustainable Development Goals.

Ultimately, the Youth Assembly was a truly rewarding experience. I am truly honored to have been given the opportunity to delegate and represent the United States. Learning about taking initiative towards the SDGs, reuniting with friends from summer programs, and meeting influential youth from around the world gave me a brighter glimpse into a hopeful future. When youth are given the opportunity to make an impact and positive change, there are no limits. We’ve seen it with March for our Lives, the PERIOD Movement, and the MidTerm elections, and I have no doubt that we will continue to see it in the future.

To learn more about the Youth Assembly, please don’t hesitate to contact me (rebecca.pan02@gmail.com) or visit their website (youthassembly.nyc)