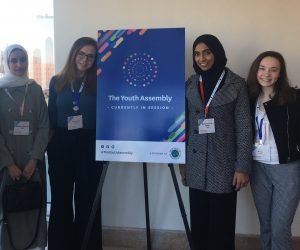 “Being a delegate at the Youth Assembly was nothing less than absolutely energizing! It was impossible to leave without a new sense of inspiration and readiness to get out there and make a difference in the world!

I was very lucky to have had this opportunity, and was humbled by the people with such amazing backgrounds around me. Ninety three countries were represented by the nationalities of the delegates, so this was by far the most diversity I’d ever been exposed to and I loved every minute of it! It really is a wonderful thing to be able to hear people that aren’t exactly like you talk about their personal experiences that differ from your own, and relate to them through commonly held values that are unchanged by varied ethnicities.

Delegates were able to choose the “sessions” they wanted to attend, to ensure that there was never a moment when you weren’t completely invested in what you were hearing (what you were hearing was a panel of around six people each with a PowerPoint presentation on the incredible and altruistic things they were doing for the good of people and their impact globally.) A highlight for me was hearing from Nadya Okamoto, who is the CEO of PERIOD, the fastest growing organization in the country run by someone under thirty!

I was specifically very interested in the Mobilizing Youth for Climate Action session, where I left feeling inspired to put my frustration into action, and have not lost that sense even now. I’m ready to take my ideas that were fueled by people abroad back to my community in Massachusetts, and educate my peers on how we can help to stop climate change by lowering carbon gas emission.

What I learned from the assembly was that it is so important to talk to people that you maybe wouldn’t normally have the chance to talk to. Only when we connect with people outside our “normal” circles can we start to make and see a difference in the world. It was so amazing to hear worldly and powerful women from Dubai talk about casual things, like that going vegetarian is what makes their skin flawless, or laughing about cultural misunderstandings with a much more local new friend from Canada.

Hearing from such great and influential people around my age really showed me that being young does not have to inhibit me from putting my ideas to action. Being young does not invalidate my aspirations at all. We’re all trying to help the same planet, and actions taken by anyone of any age or any ethnicity help all the same. The only thing left to do is get out there and change the world! “