In Memory of Raymond Francis, M.Sc. 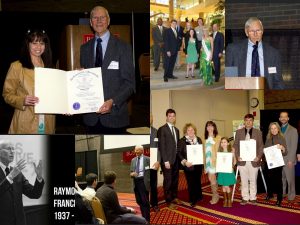 Project Green Schools lost a dear friend, Author, Raymond Francis, M.Sc., who for more than a decade taught our Founder & Executive Director how to choose health. In 2004, following the birth of her second daughter, Robin Buchanan, nearly died after 3 life-threatening anaphylactic attacks and complex health-related issues. Robin’s story echoed that of Raymond Francis’ and her father told her to contact him immediately. She did. Within 24 hrs. Raymond called Robin and he guided her to better health, finding a doctor that changed her life and so much more. Raymond’s book, Never Be Sick Again inspired Robin to create Project Green Schools. She and Raymond discussed the importance of learning how to make healthier choices for your body. With Robin’s background in formal education and a passion for the outdoors, Robin wanted to take this message to young people and connect the dots for creating healthy bodies and a healthy planet, and to make explicit the connections between the two.

Raymond was a friend and proud supported of Robin’s and Project Green Schools. Project Green Schools was/is a supporter of Raymond’s body of work as an accomplished author, internationally known radio host and creator of TPED (The Project to End Disease). We/I thank Raymond for attending one of our very 1st Awards Ceremonies at Genzyme, an early fundraiser held at the Boston Marriott and a Green Schools Summit held at

Raymond and Robin stayed connected and Project Green Schools, formerly known as Green Schools, Inc. and Robin’s Story can be found in his book Never Feel Old Again. Raymond sent Robin an autographed copy with a personal note when he released this book and they shared more stories and goals afterwards.

Not everyone has the opportunity to connect with someone who saves their life and inspires a movement. Raymond, means/meant so much me, to my family, to actor Rob Schneider and to countless other. Project Green Schools and I will continue to share his model and message, and Raymond Francis will most definitely missed.